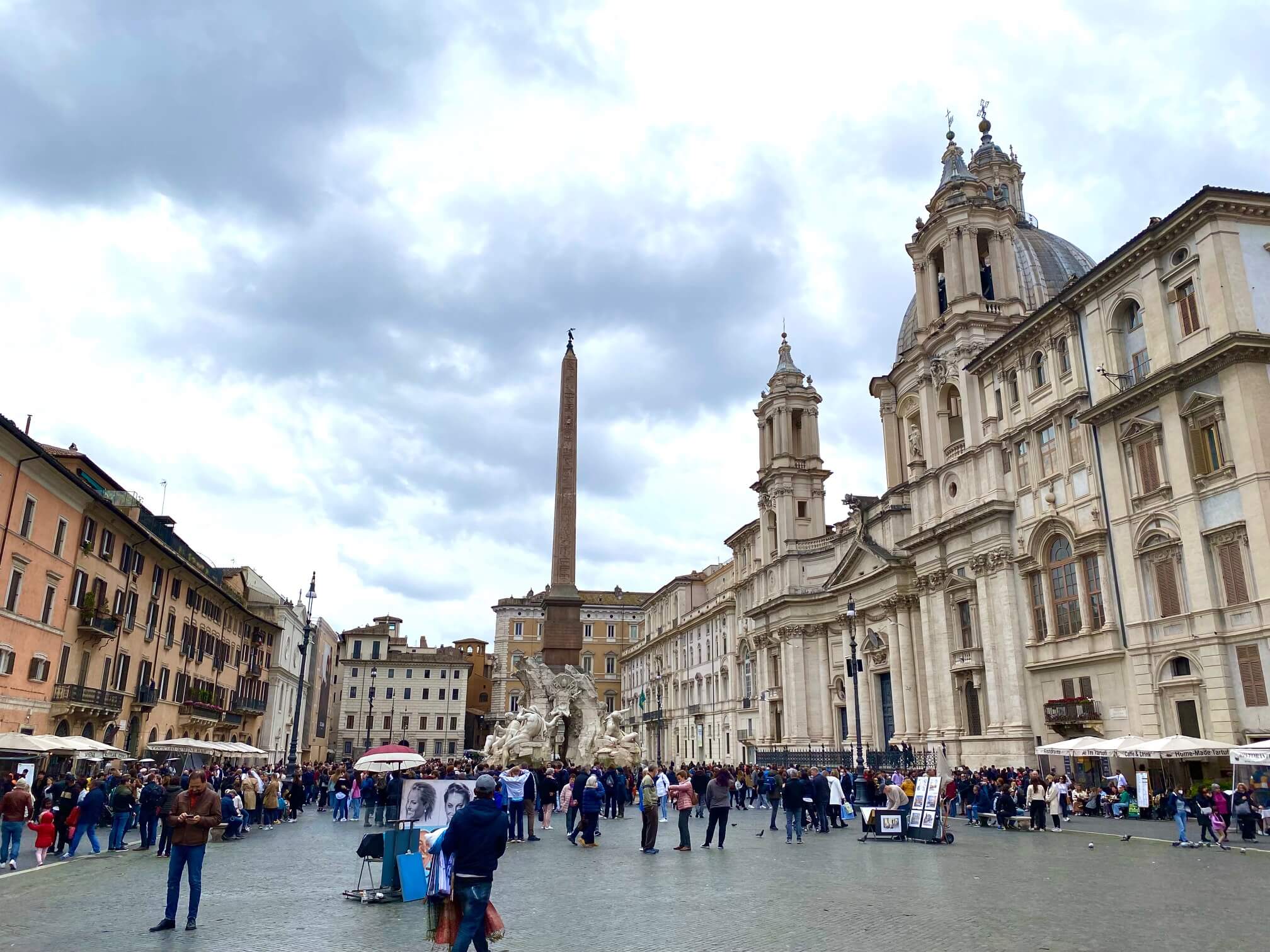 After booking my Colosseum tour, I knew the next step was reserving our food tour in Rome. We’ve taken over a dozen food tours around the world, and we never regret it. And while we’ve enjoyed using a few different companies, Secret Food Tours has become our favorite.

Food is a part of daily life, family celebrations, and an integral part of any culture. So a food tour is an ideal way to explore a new country, city, or region. The added benefit is a guide sharing the local history and traditions. In fact I think food tours are among the best ways to become immersed in the place you’re visiting.

For our tour we gathered at Piazza Navona, one of Rome’s best known squares. Its focal point is the Four Rivers Fountain, commissioned by Pope Innocent X and unveiled to the public in 1651. This space has served as a gathering spot for Romans since the first century.

After introducing himself, our guide, Robbie, led us to a nearby cafe for our choice of a coffee drink. While we sipped our beverages he introduced himself and gave us an overview of the afternoon.

We strolled through the streets of Rome for about ten minutes and arrived at the bustling Antico Forno Roscioli, a family owned bakery and pizza shop popular with both locals and visitors. While customers waited in line for their orders a staff member ran out of the shop with a large bundle of baguettes to make a delivery to a nearby restaurant.

Robbie explained that what we were about to enjoy was Roman style pizza, something Jason and I ate several times during our stay in Rome. This thin crust pizza is baked on large rectangular, metal sheet pans and then sliced into smaller servings. Some places sell it by weight, others by the piece. What we loved were the unique toppings that aren’t typical in the U.S. including squash blossoms, chicory greens, artichokes, and eggplant. It’s also common to see pizzas topped with meats like sausage, salami, and prosciutto.

The Italian city of Naples is responsible for first creating pizza in the 1600’s. The version now popular in Rome became popular in the 1950’s. Today many Italian cities have their own version of pizza with different crusts, sauces, and toppings.

Next we walked a short distance to Campo di Fiori, one of the best known squares in all of Rome. A large outdoor market takes place here everyday from about 8 a.m. to 3 p.m. It’s an explosion of colors and smells from all the fresh fruit and vegetables.

Our next food stop was at a norcineria, an old Italian word for butchery. This particular one has been in business since 1890. Hundreds of smoked and preserved meats hung from the ceiling and filled the glass display case. I’ll admit that the outside of this shop was a bit intimidating with the head of a boar hung over the entrance. If I wasn’t on a food tour of Rome, I probably would have kept walking.

We were treated to trays of sliced meats and cheeses, a basket of sliced bread all accompanied by a bottle of red wine from Tuscany. This was charcuterie at its absolute best.

Stay in touch! Sign-up for our monthly newsletter filled with travel tips and inspiration.

Headed to Spain? Here’s our recommendations for what to eat in Barcelona and Madrid!

After two savory stops, it was time for something sweet, so we headed to I Dolci di Nonna Vincenza, a family-owned Sicilian pastry shop. In the front room were large display cases loaded with cakes and pastries. In the back room were baskets and canisters filled with Easter candies (we were visiting in April, just a few days before Easter).

Most of the tour had been spent standing or walking, so this stop allowed us to be seated and use the restrooms. Then Robbie served us cannolis; tube shaped, crunchy pastry filled with sweet ricotta. It’s believed that the creation of the cannoli took place around the city of Caltanissetta between 827 and 1091. I must admit that cannoli are not my favorite Italian dessert, I much prefer tiramisu. Jason however, is a big fan of this traditional Sicilian sweet.

Would it be a food tour in Rome if we didn’t eat pasta? I don’t think so.

But before our pasta stop, we had the opportunity to walk through the Jewish Ghetto of Rome. Established in 1555 by a Papal edict, this neighborhood was originally surrounded by a wall so Jews could be forced to live and work here. Of the thousands of people living here during the Nazi occupation just 16 survived. Small gold plaques are frequently seen in front of homes, each inscribed with the names of the former residents murdered in concentration camps. From this horrific past, the Jewish Ghetto today has evolved to become one of Rome’s trendiest spots filled with popular restaurants.

We eventually found our way to a taverna, traditionally a very informal restaurant. We were treated to two traditional Roman pastas, cacio e pepe and Amatriciana. This first is simply cheese and pepper, quite possibly my favorite pasta in the world. The second is tomato sauce, red peppers, and bits of guanciale, a salt-cured pork jowl.

Robbie shared with us that pasta was originally long and served with olive oil. With the introduction of tomatoes in the 16th century and subsequently tomato sauces, shorter pastas were introduced.

Since we were visiting during artichoke season, a platter of fried artichokes accompanied our pasta. In the U.S. we typically use only the heart of the artichoke, but in Rome, most of the choke is used and commonly it’s fried so that the tough outer leaves become crispy.

Gelato To End The Day

I didn’t really have room for gelato, but it seemed so wrong to pass it up. Our tour concluded at Corona Gelateria, a family-owned shop that makes its own gelato on site every day. There were over two dozen flavors to choose from. I took only a few bites, but it was delicious.

Most Definitely The Best Food Tour In Rome

It had been three years since we’d been on a Secret Food Tour and it felt great to be back. Our personable guide, Robbie, combined with a beautiful city and amazing food made for the perfect afternoon. While it’s easy to eat great food all over this city, having the help of an expert to guide us to lesser known and family-owned shops and restaurants made it worth every penny.

Looking for other great tours in Rome? Be sure to book this Colosseum Underground Tour today!

Stay in touch! Sign-up for our monthly newsletter filled with travel tips and inspiration.

The Perfect Day Trip From Florence

Is Riding A Gondola In Venice Worth It?

The Perfect 3 Days In Rome