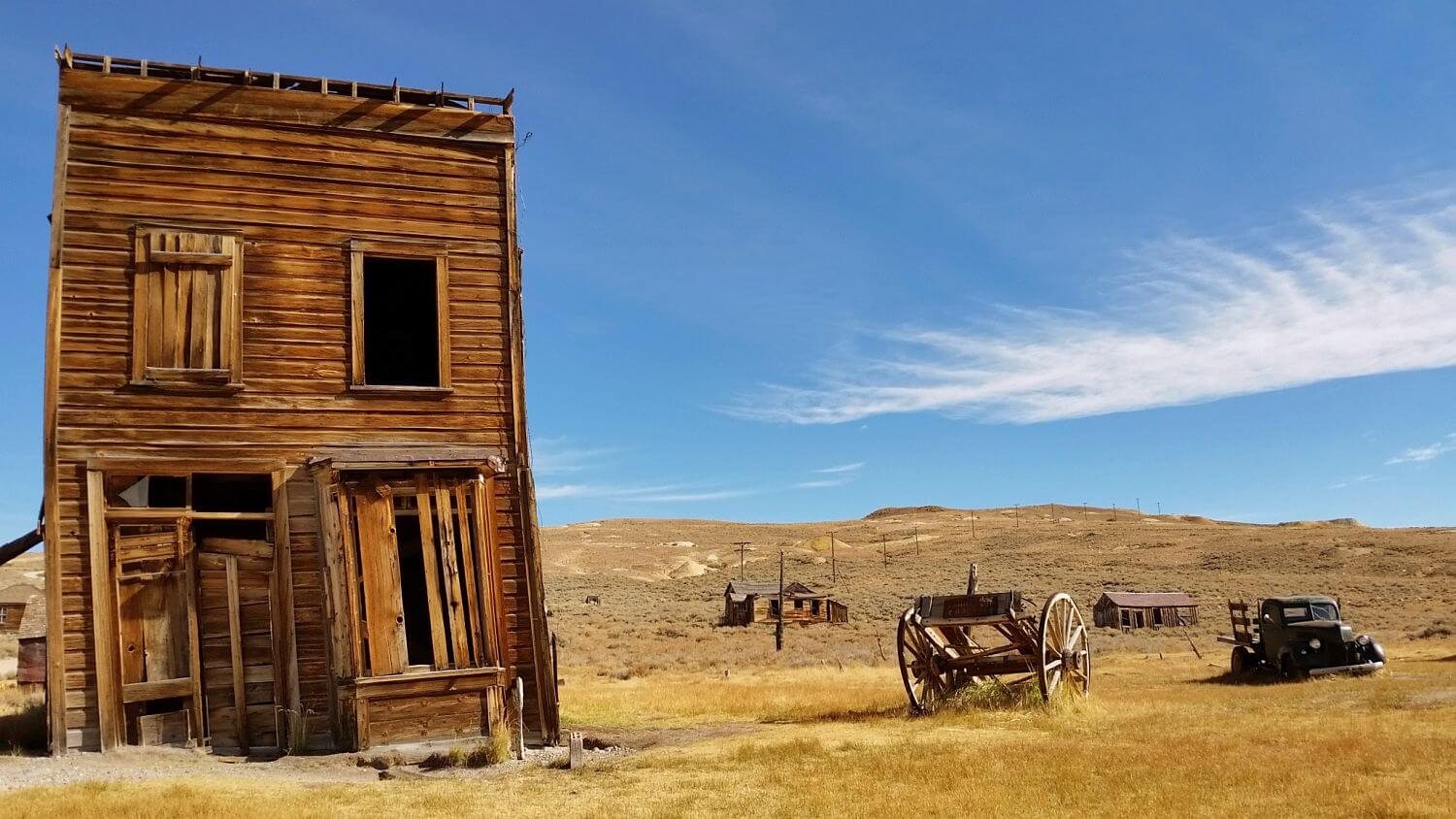 What You Need To Know About The Ghost Town Of Bodie.

I’ve long heard of the ghost town of Bodie, but waited until my third visit to the Eastern Sierra Nevadas to finally visit. Here’s my advice--don’t wait to visit Bodie. This state park is definitely worth the long drive and entrance fee and now ranks among my favorite things to do in the region.

Formally known as Bodie State Historic Park, this abandoned town was once home to 10,000 people. It featured two churches, a school, and even a Chinatown. But what it was best known for was it’s bars. At its peak, there were 65 saloons in operation!

On a recent siblings trip to Mammoth Lakes with my sister, Beth, and brother, Erik, we got up early and drove to Bodie. We all loved it and would recommend this half day adventure for any age.

How To Get To The Ghost Town Of Bodie

I’m not aware of any organized tours to Bodie, so you will need a car, either your own or a rental. We began our trip in Mammoth Lakes, so getting to Bodie was an hour and fifteen minute drive Northwest along the very scenic Highway 395. This is also a popular day trip from Yosemite National Park. If you’re coming from Yosemite you’ll exit the park at the Tioga Pass Entrance, continue East along Highway 120, and then join Highway 395. From the park allow about an hour of drive time.

The final twelve miles to Bodie are along Highway 270. This first section of the road is paved, but the final three miles are on a gravel and dirt road, so be prepared to drive slowly and bounce around quite a bit. I was really grateful to be in my all wheel drive Volvo SUV.

Finally you’ll see the entrance to Bodie. The current admission price is $8 per adult and $5 per child. You’ll be offered the opportunity to purchase a guide for $3 which I highly recommend.

History Of The Ghost Town Of Bodie

Gold fever hit California in 1848 when the precious metal was discovered in the Sacramento Valley. Overnight thousands of prospective gold miners descended on the area and in under four years a total of $2 billion worth of gold was extracted.

Almost thirty years later--in 1876--large deposits of gold were discovered in the tiny town of Bodie. Unfortunately the town’s founder, W.S. Bodey, would never benefit from this gold--he died soon after settling the small town along with a group of prospectors.

After the discovery of gold, Bodie exploded into a bustling mining town, which lasted until the late 1880’s. Unions formed, banks opened, and newspapers were published. Simultaneously a red light district and brothels began serving the desires of a mostly single, male population. Coupled with the presence of so many saloons, bar brawls, shoot outs, and murders became a common occurrence.

By 1910 less than a 1,000 people remained in town. In 1942 the U.S. Post Office closed and the town was abandoned. When the California State Parks took over management of the town twenty years later, everything was left exactly as it was found, described as “arrested decay.” Liquor bottles remain on tables, ragged curtains still hang in windows, and decrepit furniture fills living rooms.

Today just 5% of the original buildings remain, including a church, a few saloons, a hotel, the schoolhouse, and several homes. One home is left open to visitors to browse while most of the buildings must be viewed through windows. Scattered between the weather worn structures are old, rusted cars and random mining equipment

Dress Appropriately For The Weather

Bodie is located at 8,379 feet of elevation, so the weather rarely gets too hot. However, it can become quite chilly in other seasons and the location is prone to winds. Since you will be outside the entire time, come prepared with warm clothes. We visited in October and I wore a down jacket and brought a hat and gloves.

From a weather perspective, summer probably is the best time to visit, just be sure to bring sunglasses and a hat. There is little shade in the park and I found the glare from the sun to be pretty intense at this elevation.

Do wear comfortable, close-toed shoes. There is a short paved path near the parking lot, but everywhere else is uneven dirt roads and fields. I opted to wear my hiking boots and was happy I did.

Be Prepared To Walk

While there aren’t many buildings left in Bodie, they are scattered over several acres. To fully explore the town you will be walking for about an hour. We chose not to visit the cemetery, but if you’d like to do that it will be an additional half mile of walking. Needles to say, come prepared to walk, and again, wear proper footwear.

With limited paved paths, Bodie is not well suited for strollers, wheelchairs, or walkers. If you’re traveling with an infant, a baby carrier is a better option.

At the parking lot you’ll find restrooms, but this is the extent of services within the park. Be sure to bring water and snacks for everyone in your party. During the summer, bring sunscreen. And before heading out from your home base, be sure to have plenty of gas in your car. There are no services along Highway 270, and limited ones on this section of Highway 395.

Take Time To Learn The History Of Bodie Ghost Town

We began our visit to Bodie by viewing the 28 minute introductory movie and I highly recommend doing the same. The film incorporates the writings of many residents of Bodie along with newspaper clippings from it’s glory days. There is limited signage throughout the park, so this is your best opportunity to understand the rise and fall of the town. Then head out to explore Bodie with the guide which provides details about each of the remaining structures. Combined, you’ll leave the park with a good understanding of how the town was founded, expanded, and eventually abandoned.

Transportation to and from Bodie, combined with time to explore will range from four to six hours. You don’t want to feel rushed and at times you will have no choice but to drive very slowly. You will want to enjoy this very scenic drive.

On the drive to or from Bodie, consider stopping at Mono Lake and it’s Visitors Center. If you are coming from Mammoth Lakes, you may also want to take a short detour on the return trip through the June Lake Scenic Route. There is so much to see in this part of the Eastern Sierras, so I encourage you to take the time to explore it!

I always assumed I’d enjoy the ghost town of Bodie, but it definitely exceeded my expectations. Next time you’re in the Eastern Sierras, set aside a few hours to explore this piece of California’s history left in a state of arrested decay.

Planning A Trip To California–Everything You Need To Know

11 Awesome Things To Do In Orange County–Outdoor Edition