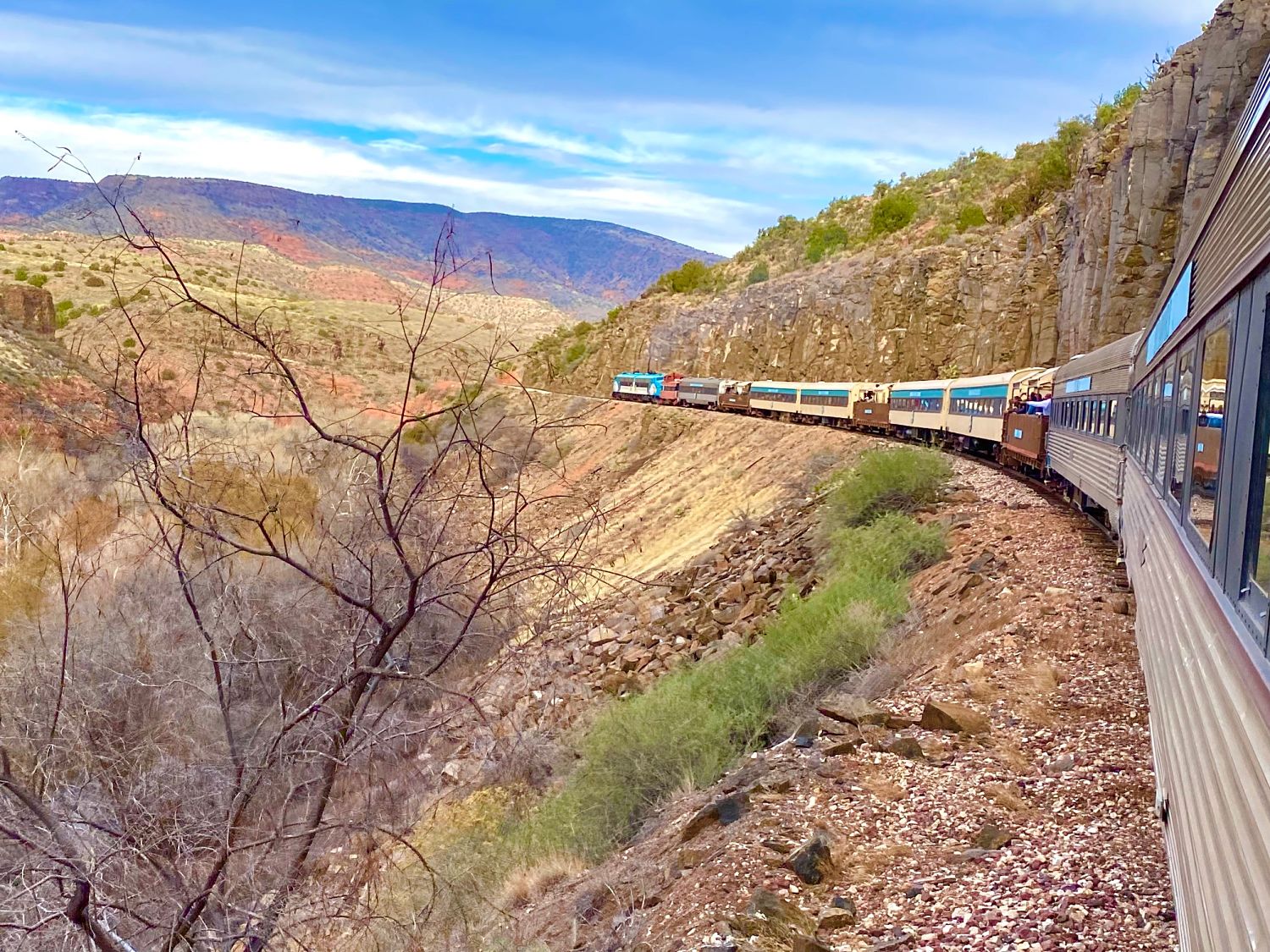 A Lovely Afternoon On the Verde Canyon Railroad.

As Jason and I were planning our trip to Sedona I began researching tours of the area and discovered the Verde Canyon Railroad. This four hour ride through the second largest canyon in Arizona was highly reviewed and seemed like a fun and relaxing way to spend an afternoon.

I’ll admit that I don’t ride trains often, but they’ve always intrigued me. My mom doesn’t like to fly, but prefers to travel by train. She’s crisscrossed the United States–and Europe–by train and always comes home with great stories of the people she met and the sights she has seen.

So I booked our tickets and eagerly awaited our trip to Sedona and the Verde Valley in Arizona.

The Verde Canyon Railroad begins in the tiny town of Clarkdale. Guests are assigned to a railcar and then specific seats within the car. Boarding began about fifteen minutes before departure. This was ample time to take some photos, meet our host, get familiar with the layout of the train, and then wait for our safety briefing.

And I must mention that we appreciated the ample and free parking at the train depot.

Each guest is welcomed at their seats with a charcuterie box and a bottle of water. Other food items can be ordered at the time of booking, but we found the box to be very generous with tasty meats, cheeses, dips, and veggies. The host came around to pour a small portion of champagne or sparkling apple cider which was used for a toast as the train departed.

Additional drinks can be ordered throughout the journey including soft drinks, beer, and cocktails. On the day we rode they were only selling wine by the bottle.

A highlight of our experience was the open air viewing car. Fortunately, the weather was warm and sunny, so we spent about half of the time outdoors.

The train snakes its way through the Verde Canyon following the Verde River. After returning home I did some research and learned this river supports more than 50 threatened, endangered, sensitive, or special status fish and wildlife species. There are also several archeological sites in the area that have recovered and preserved remains from Native American dwellings.

What really made the outdoor time special was our friendly and knowledgeable guide, E.C. For four hours he faithfully pointed out any sight worth seeing including four bald eagles, numerous rock formations, a 100 year-old sycamore tree, and Sinagua (Native American) cliff dwellings. While the scenery is really enjoyable to watch, it could have become boring after a few hours. E.C. ‘s experienced eye kept it constantly interesting. He was also great at giving us advance notice of photogenic spots so we could have our cameras ready.

If you spend any time in this part of Arizona you’ll soon learn that mining and cattle ranching were the reason many of the towns were established. Once the mines were depleted many people left the area leaving some of the towns to die out. However, some experienced recovery thanks to new industries including tourism. The original tracks for the Verde Canyon Railroad were built for the mines, cattle, and a local concrete factory. Today they are used primarily for sightseeing. The historic railroad cars were sourced from all over the U.S. Our car, the Sycamore, was built in 1938 while the caboose dates back to 1928.

All that’s left of Perkinsville is a tiny and mostly decayed train depot along with a few other rusted pieces of equipment. However, it has featured prominently in several movies including How The West Was Won.

We watched the engine relocate to the front of the train–the kids on the train really enjoyed this process–and then returned to Clarkdale.

Jason and I returned to our seats and took a brief nap (we were feeling our cocktails!). Before arriving at the station we did pop outside to get a final view of the Verde Canyon. The return trip gave us a chance to see things we missed the first time.

Tips For Your Visit To The Verde Canyon Railroad

Clarkdale is about a thirty minute ride from Sedona, so be sure to allow enough time for transit and parking. If you want to grab lunch before the ride there is a cafe at the depot. There’s also a souvenir shop with plenty of great train-related gear. Our son, Ryan, loved trains when he was little, and this shop would have been perfect for him.

Since the train returns to the station about 5 p.m. we decided to go for an early dinner in nearby Cottonwood. Their historic downtown has several nice restaurants, boutique shops, and about a dozen wine tasting rooms. We started with wine tasting at Burning Tree Cellars and then had dinner at Tavern Grille. On a previous trip to Cottonwood I enjoyed an excellent dinner at Nic’s Italian Steak & Crab House–this would be the place I’d recommend to anyone visiting Cottonwood for the first time.

The nearby, historic town of Jerome is filled with bars, wine-tasting rooms, shops and a few restaurants. Known for being haunted, this is on many people’s to-do lists when in this part of Arizona. Jason and I didn’t love it, but if you’re interested, it could easily be combined with a train ride.

If you’re visiting Sedona I can’t recommend the Verde Canyon Railroad enough. Both Jason and I found it to be a lovely way to spend the afternoon. It met our goal of being both fun and relaxing.

Sign-up For Our Newsletter Full Of Travel Tips & Inspiration!

The Perfect Trip To Page Arizona